*This post may contain affiliate links. As an Amazon Associate we earn from qualifying purchases.

A leader in the baseball bat market, Easton’s Mako line of baseball and softball bats is one of the most popular among players and coaches due to the high performance and excellent durability that have been trademarks of Easton bats for the past several years. I tried it out last season and now I’m a believer, and I now understand why it is consistently rated as one of the best bats available – a new Easton Mako bat will improve on-field performance and give you confidence at the plate.

Things To Consider Before Purchasing A Bat

One large consideration that I have before purchasing a bat is whether or not I can use it in cold climates. If you’re like me and you live in an area where the summer weather really only last for maybe 2-3 months out of the year, you need a bat that you can take out in early spring or late fall. I’ve found that it can be difficult to find a bat with a barrel that won’t crack or develop any flat spots in colder temperatures. Some bats perform better in hot and humid temperatures, while others can hit the ball further when the air is cold; it really does depend on the individual bat.

Another thing to pay attention to is how much you want to spend on a bat. They can range from under fifty dollars all the way to over three hundred dollars. This is an important thing to consider before deciding on which one to buy.

Aside from that, you should consider both the swing weight and length in finding the right bat for you. It’s important that you are able to swing the bat comfortably without losing any bat speed.

The one bat that I feel has surpassed my expectations is the Easton Mako. 2017’s line of Mako bats has been aptly named the ‘Beast’, which is an excellent description of how one feels when they have the bat in their hands at the plate. There’s a reason why this turned so many heads at the 2016 Little League World Series, as it was one of the most popular bats amongst players at the highest level of the game. Almost half of the teams that were part of that tournament featured players who chose the Mako as their bat of choice.

As with all of Easton’s bats the 2017 Mako features the TCT barrel with 2-piece ConneXion technology, and even offers a very slight endload compared to prior copies. I’m quite excited for this as I feel a bit of endload could help bring out even more pop and power to my hits. 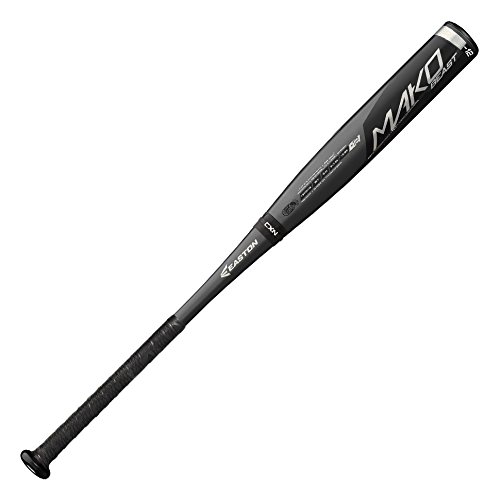 The Mako has two main features that I believe set it apart from competitors in the market. First, Easton uses TCT Thermo Composite Technology which results in a remarkable composite barrel that is incredibly hot out of the wrapper with minimal break-in time. Usually a barrel of this composition would be prone to wear down quite quickly, but the TCT technology seems to strengthen the composite fibers within the barrel reducing the risk of breaking or cracking in the barrel. I’ve used mine for about 2 seasons and haven’t had any issues with durability yet.

Since the Mako has improved composite construction that should make it impervious to minor dents and flat spots, it is a fairly suitable bat to use in colder climates or playing later into the fall when temperatures start dropping. Many of the tournaments I play in are during the fall, and I have had no issues at all.

Overall the Mako performs better in hotter weather as it crushes low compression balls when the air is hot and humid. It is still a formidable bat in colder weather with high compression balls, but I have found that the ball seems to fly better when it is wam out.

Second, the handle is connected to the barrel by Easton’s ConneXion technology which aims to transfer as much energy from a player’s hands to the barrel of the bat, resulting in maximum power. The issue with many prior one-piece bats was they just didn’t offer enough pop, as the handle was rarely made of the same composite material as the barrel. This has since improved with more recent technology, but wise manufacturers started creating two-piece bats with composite barrels.

The problem that needed to be solved was how to keep the bat stiff if the two pieces were connected in the middle. If the handle flexed too much, a lot of the power would be lost before it even reached the barrel. It appears that Easton has done a formidable job of addressing this as the Mako does swings rather stiff but does not seem to sacrifice anything on the power scale. I’ve swung some stiff bats before but the Mako seems to keep the handle and barrel connected very well and it does feel just like a one-piece bat when you make contact with the ball.

On the topic of budget, I must be honest with myself and acknowledge the high price tag on the Mako. It is a premium bat, and it comes with a premium price tag. It definitely is not for you if you are on a tight budget and cannot afford it.

A wonderful bat that looks like it can add serious distance to a young hitter’s game, much as it did for mine. The 2017 version of Easton’s Mako bat continues to build upon past generations and the future is bright as technology keeps improving. I anticipate the 2017 Easton Mako will be another success and one of the most popular bats on the diamond this year.

A Few Alternatives For Comparison

Let’s take a look at how some alternatives stack up against the Easton Mako:

A very popular choice amongst players and coaches, DeMarini has stepped up their game lately and 2017’s version of the Zen is no exception. I was a big user of DeMarini bats in the past (EVO, The One, etc.) and the Zen was right up there with the Mako.

A fantastic bat that heats up after broken in, some of DeMarini’s best technology is combined in the 2017 Zen. A great option for those looking for a 100% composite construction bat, but overall I felt the pop and power was less than the Mako.

One of the largest sweetspots you’ll find on a bat anywhere, the Combat Maxum also swings incredibly light and balanced. A rare one-piece composite construction, the energy transfers directly from handle to barrel with minimal bat flex. Carbon fiber sleeve has been injected with liquid resin to increase durability in the barrel. I am always eager to try one-piece bats, and the Maxum was no exception.

Easily the largest sweetspot of the bunch, Combat’s Maxum is a true engineering feat with the PMT liquid resin creating excellent durability and a consistent result each time the ball is hit. Though overall the ball may not be hit as hard or as far as the Zen or Mako, it still delivers a very powerful hit when contact is made.

In conclusion, when you are shopping around for a bat this year there are several terrific manufacturers offering very good bats at a variety of prices. Some may be better than others, but overall the cream of the crop appears to be the Easton ﻿﻿﻿Mako, as Easton has truly invested in research and development side of its baseball operations to ensure that the latest technological advances are carried through to their 2017 line of bats. Try out all three for yourself if you’re able to, and I think you’ll find that the Mako wins as the best combination of pop/power and durability.

As the colder weather blows in we turn our attention to the offseason and getting the kids into winter sports like skiing, tobogganing and hockey. But let’s not forget that winter is a great time...

As the season winds down you may be taking inventory of your equipment and what may be needed for next year. One thing that almost all players use are a good pair of batting gloves, and the offseason...

Here at The Planet Of Baseball we are all about one thing... helping you or those you love get better at baseball/softball. To that end we have created many different articles about the best bats, gloves, and gear as well as tried to answer some of the most popular questions about these sports.


Whether you are just curious about baseball or softball or have more specific questions we will try to answer them on this site.